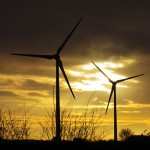 600 million Africans have no access to electricity while the energy sources, especially renewable energies (RE) abound on the continent. Its key features: environment friendly, availability and its recent cost competitiveness gains over fossil energy; make renewable energy an excellent avenue to start an energy revolution in African. However, having affordable, sustainable and smooth access to energy has a cost. Public policy in investments promotion and risk mitigation in the RE sector are among other issues on which African Government should work on.

This study evaluates the potential of the continent in terms of renewable energy source, assesses the investment needs in light of the renewable energy targets of African countries and presents a set of recommandations to ensure these could be reached. Read the full note.

Today, it is a fact that risks due to climate change are a serious threat to our societies. The concept of “climate governance” used by climate experts appeared in this context.

Govern the climate? This question is doubly puzzling. For what reasons? What historical process? With what methods?

Climate is, firstly, a matter of geography, then of physical and atmospheric sciences. How has climate become an object of governance at the end of the 20th century? Is climate can actually be governed, when we daily witness on TV tornadoes, floods and extreme weather disturbances all over the world?

Governance applies on many levels, and we can retain three dimensions: An international, national or regional and then a local dimension. We talk about local, territorial, corporate, employment and global governance. In addition, the word “governance” derives from the Latin "gubernare" which means governed, to pilot a ship. So, this is the art or manner of governing, by promoting a business management model.

According to Jacques Theys governance is:  "a managerial conception of public systems and it basically intends to find pragmatic solutions to market or public intervention failures" (Theys, 2002).

The objective of this article is to determine the climate issues in Africa and the role of African States in global climate governance.

First, Africa is a continent that consumes little power with 621 million people that don’t have access to electricity. Then, from one country to another, differences are huge. For example in DRC access to electricity is of 16%, 53% in Botswana and 85% in South Africa. Besides, this is also in Sub-Saharan Africa, excluding South Africa, where the consumption is up to 139 billion KWH for a population of 860 million, which is far less than in Spain, 243 billion KWH for a population of 47 million inhabitants (Le Monde, 2016). For example, a Tanzanian will consume in eight years as much energy as an American in a month. Moreover, in Great Britain, a  kettle used by a family consumes five times more electricity than the average annual consumption of a Malian.

However, even though Africa is the continent that contributes the least to global warming worldwide, 4% against 15% for the US and 26% for China, it must be said that Africa faces the full brunt of the climate change effects with the multiplicity of recent years floods and droughts on the continent. It is urgent to take action and to adapt to climate change knowing that a temperature increase of two degrees could cause a decline in agricultural productivity, up to less than 20% in 2050, which would worsen the food crisis. This adaptation should be both political and environmental to protect against major risks of climate change. Indeed, the most commonly used definition of human adaptation systems to climate change is the one of the Intergovernmental Panel on Climate Change (IPCC): an "adjustment process to the current climate or expected as well as its consequences, so as to minimize detrimental effects and to exploit the benefits. " This definition refers to both current and future climate, and considers both natural and anthropogenic climate change.

Does Africa have the means to adapt and govern climate risks?

According to the UN, Africa’s adaptation costs to climate change amounts to 45 millions euros per year by 2050. The issue of climate finance from Northern countries to the benefit of countries of the South was one of the challenges of COP21. Indeed, a support fund would find alternatives to charcoal, which is widely used in Africa, 4 out of 5 Africans use it for cooking. The consequences of this use are ecological but also sanitary. Each year, 600,000 Africans die from inhalation of this fuel, it is almost as much as much as malaria and HIV. Renewable energy is a new alternative that is why more and more African countries rely on green energy. Thus a country like Ethiopia has decided to develop renewable energies to reduce climate risks.

Resolving problems related to climate change is also initiating governance at global and local levels that will find adapted solutions to climate risks. What is the role of Africa in global climate governance? The Paris conference on climate change in December 2015 has once again demonstrated the ridiculous place of Africa in the various issues of climate negotiations. This can be explained by the fact that for African countries, the main objective is economic development. But economic development without environmental concerns is it sustainable? The issue of climate change is therefore put at the second place in the hierarchy of needs in Africa, enough to retain a single point on the various African climate concerns: support to poor countries to adapt to climate change and reallocate 1000 billion $ of private investment towards low carbon economy.

All in all, the African continent remains fragile on the various threats related to climate change. Even though important initiatives around a green economy are erected in some countries that are ahead in energy policies like Morocco with the world's largest solar park, a local work will need to be done. To drive a real momentum in the fight against environmental changes, it starts with empowerment of local and regional civil awareness. This extension of ecological civic consciences towards nature will allow a better consideration for environmental concerns in African issues. This will pave the way for a better valorization of African local and regional initiatives in the development of environmental programs worldwide. So far the influence of Africa in this geopolitical climate is very limited.

Despite a decade of strong growth, Sub-Saharan Africa still faces a number of social and economic challenges. These range from access to education, off-the-grid electricity, clean water, job creation and public infrastructure. While there is no silver bullet, one word is inspiring millions – innovation.

Of course, innovation doesn’t just happen, it takes government will. In short, the region needs to reform its economic structures to make enterprise easier. The international community also has its part to play as do foreign governments and global bodies – one piece of the jigsaw is a fair deal on climate change.

The COP21 conference in Paris last year laid bare the dual threats to African economic growth in relation to global warming. The first is that by asking African countries to greatly reduce their carbon output, we are asking the region to compromise economic development.

Moreover, climate change is, and will continue to impact Africa disproportionately through flooding, drought and starvation.  It is the ultimate injustice that African development should be threatened in this way. Francois Holland said at COP21 that the world owes “…an ecological debt…” to Africa. Such vocal support was much needed and it just that the final COP21 deal states that developing countries are entitled to international support in the development of new technologies. If the international community meets these obligations, African innovators will stand a much greater chance of building sustainable businesses.

Young Africans overwhelmingly prefer to work for themselves than for an existing company. They are tech-savvy with high mobile phone penetration and the continent has a growing middle-class that is hungry for high-end products and services. COP21 also provided Africa with an opportunity to showcase home-grown technologies that provide new ways to bring clean water and energy to the poorest rural communities. Energy and water support one of the region’s most important industries – agriculture. It employs millions.

Organizations such as Gorta-Self Help Africa are supporting rural farming communities across sub-Saharan Africa, helping them to find new ways of yielding crops. These include developing drought tolerant crop varieties and ‘climate smart’ technologies that help to keep moisture in the soil. Home-grown innovations such as these reduce reliance on purchasing foreign technologies, they create jobs and help to create supply chains that are the building blocks of a diverse small and medium enterprises (SME) sector. The COP21 deal also mandates that developed countries pool capital in order to provide poorer nations with at least $100 billion per year by 2020.

It is within this context of international support that young innovators can realise their potential – and it is not confined to agriculture or the environment. Mobile money solutions have helped millions of unbanked Africans enter the banking system by enabling the transfer of funds or shopping through a simple mobile phone. In the healthcare sector, new technologies are being created that have a high social impact in the prevention and treatment of disease. Professor Lesley Erica Scott won the Innovation Prize for Africa’s ‘Special Prize for Innovation’ with the development of the Smartspot TBCheck – a device that is designed to assess whether or not machines used to diagnose TB function properly. This is a technology that will greatly aid accurate diagnosis and help to curb the TB epidemic in Africa.

The challenge for such innovators is often limited access to capital. A region of disparate economies and financial systems means that Sub-Saharan Africa does not have the capital markets needed to support entrepreneurs. However, some countries, such as Angola, are pushing ahead with economic reforms that include public-private partnerships. Angola has also launched a unique state-backed venture capital fund, FACRA, which acts as a conduit between growing Angolan businesses and foreign investors. Through FACRA, businesses and investors from developed countries have an opportunity to meet financially viable, growing Angolan enterprises – providing foreign firms with investment opportunities whilst creating a new pathway for Angolan entrepreneurs to reach the capital they need to grow.

As we look ahead to a year of economic uncertainty – where low oil prices and a slump in commodities are the new normal – Sub-Saharan African nations and the international community must push ahead and do everything possible to support African innovators. Capital markets must mature, banks must be liberalised, governments must find new ways of enabling innovation and the global community must continue to do its fair share.

Africa has what it takes to create a tomorrow that helps it to meet its climate change obligations and innovators that will go on to build robust, diverse economies. Economic growth and environmental responsibility are not mutually exclusive and in order to support economic growth, the world must unite so that African entrepreneurs can develop financially viable businesses that provide African solutions to African challenges.

This article was published for the first time by TEODORO DE JESUS XAVIER POULSON on the website of the World Bank.